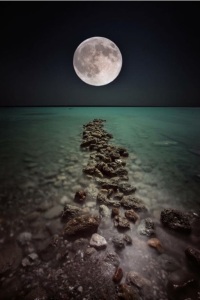 Even as a child in public school I was always fascinated by the moon. The phases of the moon and the way light from the source illuminated and changed it, preoccupied me visually, spiritually, and aesthetically. And later in life, that concept of a piece of one separated from itself and orbiting itself at a distance, as the moon was separated from the earth, orbiting and reflecting, appearing, and disappearing. This was the embodied concept of the Shekinah. No wonder the moon carries such celestial significance and meaning. Especially at those certain times when the moon is near and manifests the splendour of its’ myriad forms